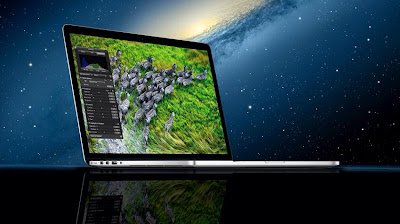 Apple announced a couple of product upgrades yesterday and despite many rumours, there was neither a Mini 7inch iPad nor was any iPhone 5!!

The old version of MacBook Pro had been around for quite sometime and it was time to be re-decorated with some new features. Not that there was anything missing in the previous version, but users had been impatiently anticipating to see a possibly slimmer body and a better display with some sort of anti-glaring layer like the ones on MacBook Air.(that's what annoys me most)

On the first day of WWDC event in Moscone centre, Tim Cook unveiled a new version of MacBook Pro with the amazing Retina display with 2880x1800 resolution topping over 5 million pixles.

The other promising feature of Macbook Pro is the intel i5 and i7 "Ivy Bridge" CPU and the upgraded graphics.

Having all those features packed into the new MBP, Apple also managed to slimed down its thickness by almost half and only a few millimetres thicker than MacBook Air.

Having seen other MBPs overheating at some point under high loads, I was immediately alarmed about the heat dissipation in the new MBP, given how much thinner it's got resulting in less space for the airflow. however it seems Apple as always managed to keep the heat under control with even less fan noise through the vents.

Here are some details about the new Ivy Bridge and the Retina display from Engadget and PCMag.

Posted by Mo Haghighi at 8:16 PM
Email ThisBlogThis!Share to TwitterShare to FacebookShare to Pinterest